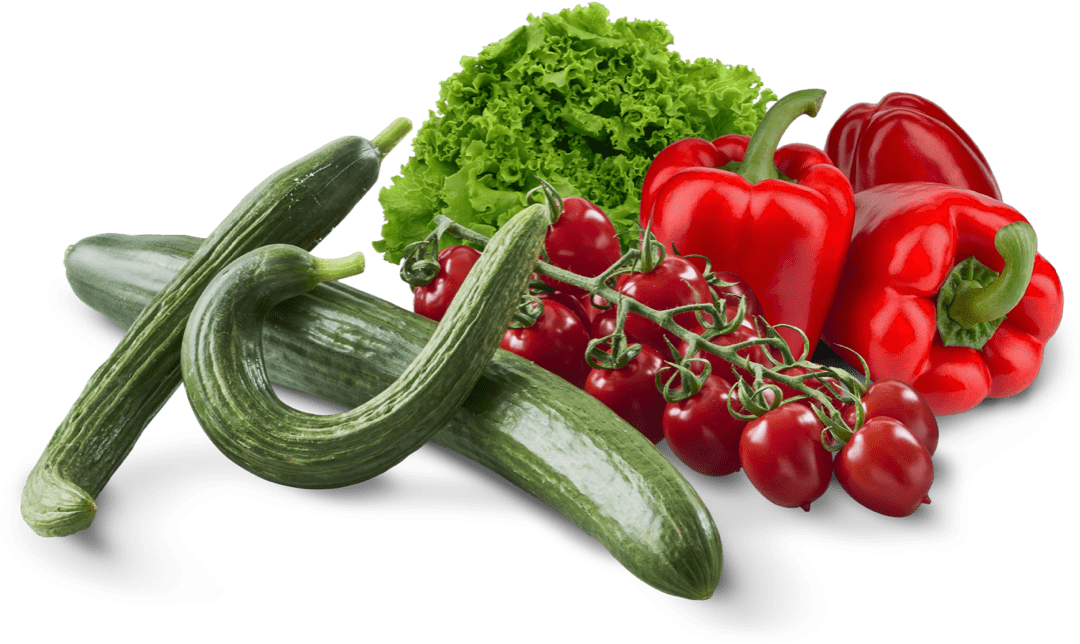 We grow Denmark’s most pampered tomatoes, cucumbers and peppers. They are hand-picked and allowed to ripen fully on the plants, as this brings out the best flavour. Quality, taste and caring for the environment and surroundings are the most important things to us – and we are always looking for new varieties. 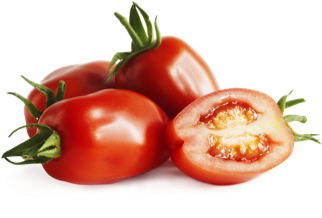 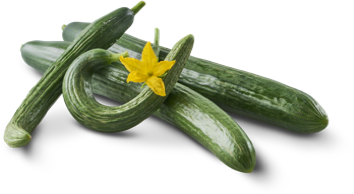 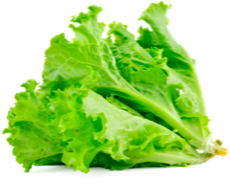 Tomatoes are one of the fruits – or vegetables in colloquial speech – with the greatest variety of flavours, and there are approx. 15,000 different tomato varieties worldwide, each with their own characteristics. The flavour of a tomato is primarily determined by two factors: What aromas are released and the ratio of sweetness to acidity.
Tomatoes are considered the best plant-based source of umami, and the riper they are, the more umami they contain. All of our tomatoes are rich in umami taste, as they are picked late and thus have a naturally high content of the amino acid glutamate.

Danish tomatoes are in season from April to November, but our cultivation methods mean that we can grow them all year round. 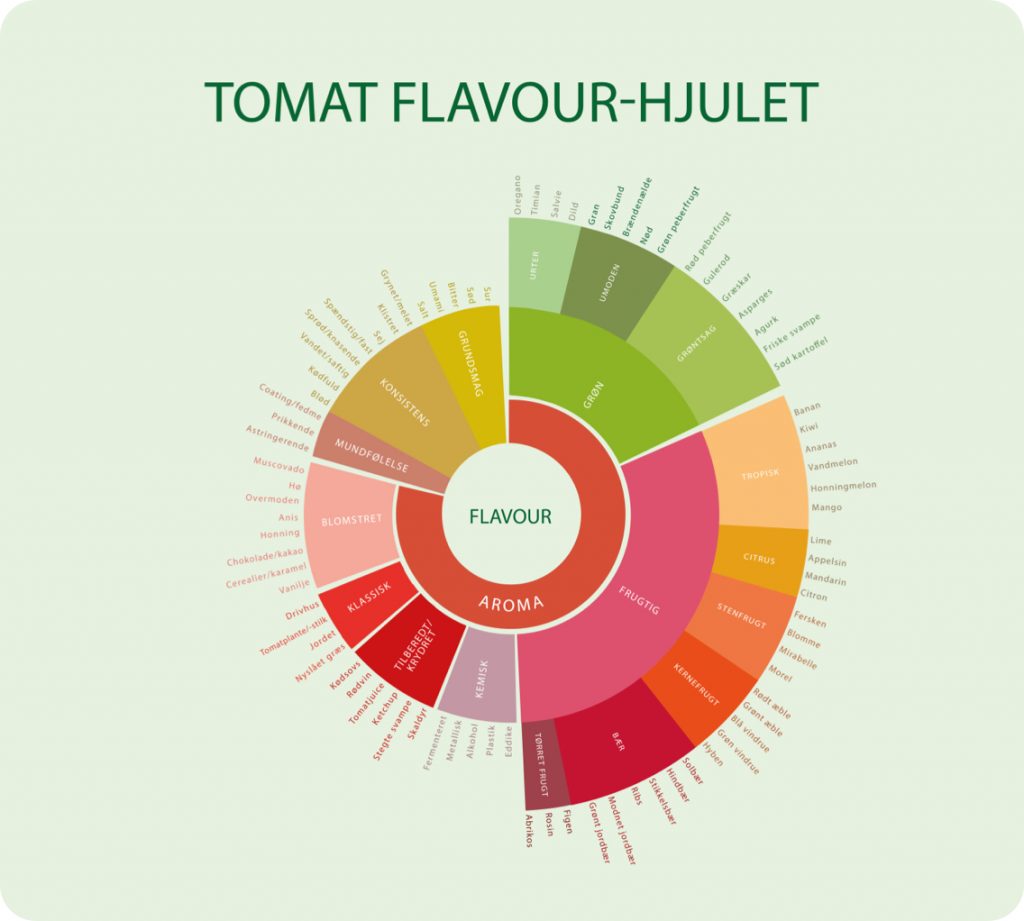 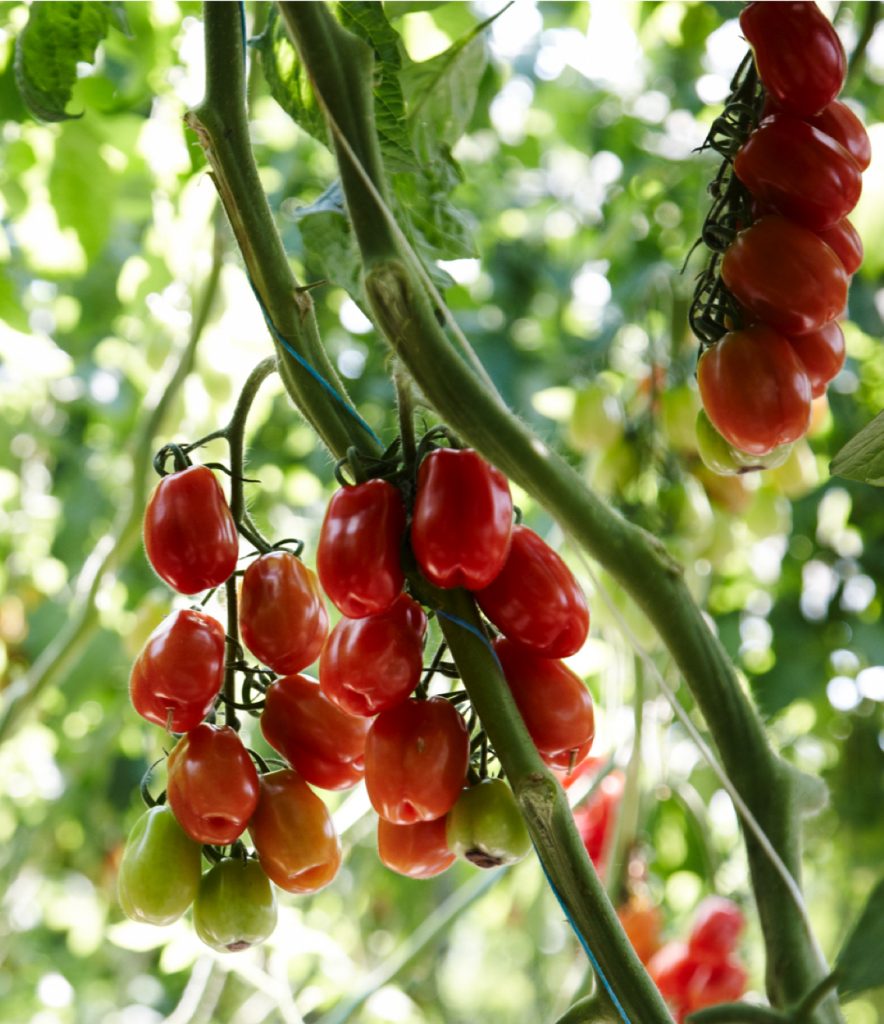 Tomatoes are a healthy and lean food with only approx. 100 kJ of energy per 100 g. They are also full of C and K vitamins, and when you eat tomatoes, you get E and A vitamins, fibres and potassium.

The substance lycopene gives tomatoes their red colour. Lycopene is an antioxidant that has many good health properties. In particular, it is believed that lycopene can help reduce the risk of developing a number of chronic diseases and reduce cancer mortality.

Tomatoes have a very high content of lycopene. They contain more lycopene per gram than any other fruit or vegetable, and the lycopene does not disappear when heated, so the more tomatoes you use and the more the tomatoes are concentrated (e.g. when made into a sauce), the more lycopene the dish contains.

The journey of the tomato from Peru to Europe

The tomato originally came from Peru but, over time, became more widespread in Central America, where it was grown as a regular crop. In the 16th century, it was introduced to Europe by the Spanish. The tomato is a member of the nightshade family, just like the potato, and it was believed for many years that both potatoes and tomatoes were poisonous. It was not until the 18th century that the tomato made its way into kitchens around the world. Today, they are among the most cultivated vegetables in the world. 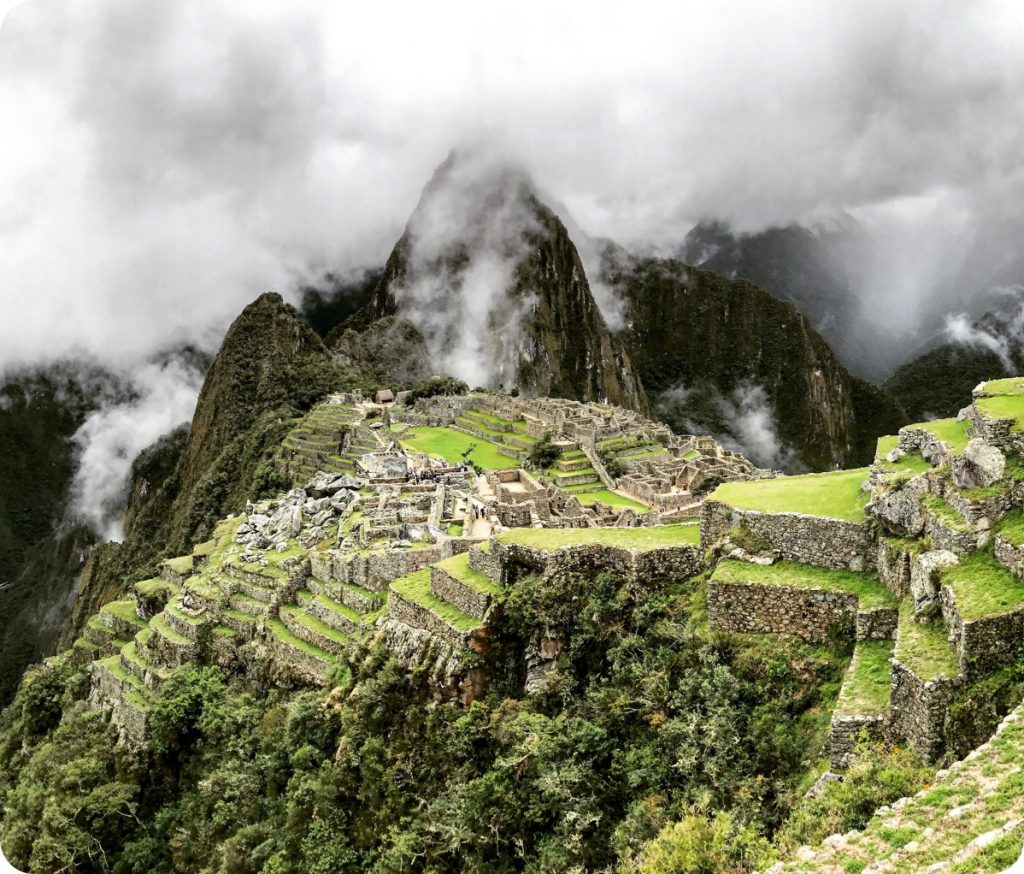 How to store your tomatoes

Never put tomatoes in the fridge! An important prerequisite for ensuring that Danish tomatoes maintain their rich taste is to ensure they are not cooled down. Allowing the tomatoes to cool down will stop the natural ripening process, which helps give them their flavour and aroma. So store the tomatoes in a bowl at room temperature – this way, they can decorate the table, and their shelf life will not be impaired in the slightest!

How to peel your tomatoes

Pour boiling water over the tomatoes and leave them for a few minutes. Drain the water and rub off the peel.

Maybe you are one of those people who throw out your tomatoes when they start to look a little wrinkly? You mustn’t! This is when the tomatoes are packed with the most flavour. Maybe they don’t look pretty in a salad or are crunchy to bite into, but throw them in a pan or in the oven with some quality olive oil, a little salt and pepper, maybe some garlic, and roast or bake them until they’re completely tender. Serve them as a side dish with grilled fish, or stir them in with some good pasta and plenty of fresh basil. 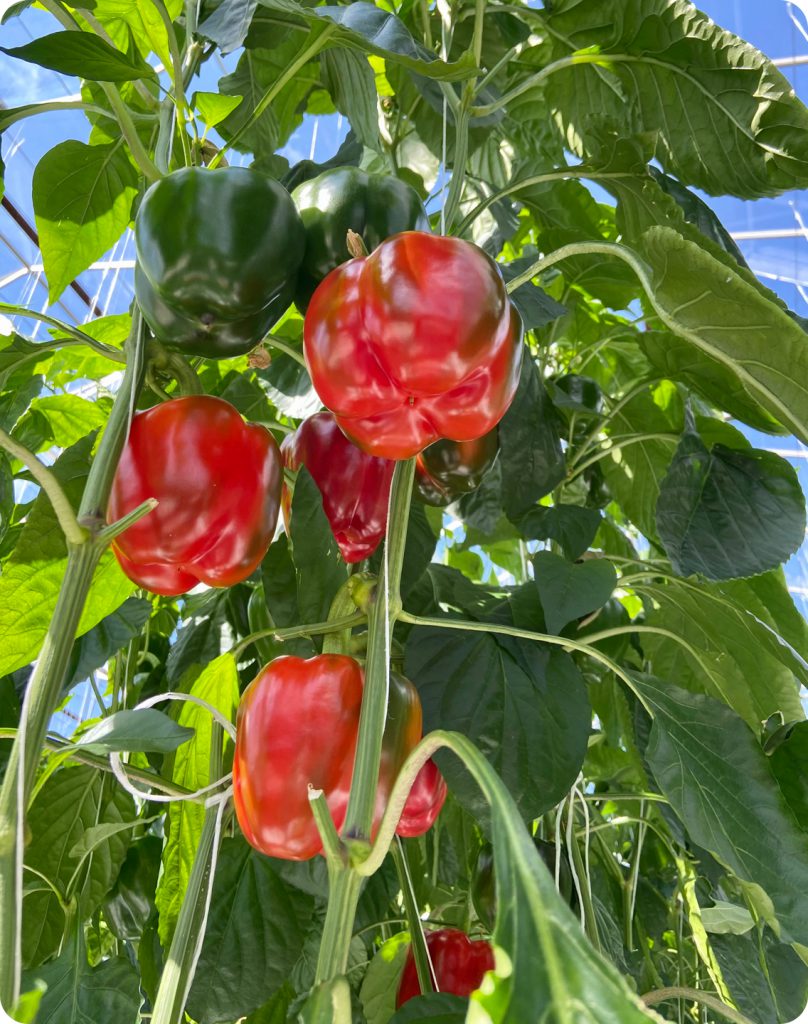 Peppers are a good source of vitamins A, E, C, B6 and folate, which support your eyes, immune system, red blood cells, skin and DNA and help your body to convert food into energy. Peppers are low in calories but high in the mineral potassium, which helps regulate blood circulation and can lower your blood pressure.

Peppers have a beautiful shape and are available in all the colours of a traffic light, depending the degree of ripeness. They are part of the nightshade family, just like the potato and the tomato. Peppers originally came from South and Central America and arrived in Europe in the 18th century. They became widespread in Denmark from the 1960s.

Remember to store peppers in a bag in the fridge. This keeps the peppers crunchy, crisp and fresh.

The cucumber originally came from India, where it has been cultivated for over 3,000 years. In Denmark, we have been familiar with cucumbers since the 18th century, when they came here from Southern Europe. In the 1900s, when cultivation in greenhouses became more widespread, we started growing our own cucumbers at home.

The cucumber is made up of 95% water, but despite this, it is full of healthy and important vitamins and minerals. It contains magnesium, which helps to calm the nervous system, and it can also lower blood pressure. It also contains vitamin K, which among other things helps the body to absorb calcium from the diet. Cucumbers contain only 15 calories per 100 grams, so you can eat freely with a clear conscience.

Cucumbers are often referred to as a vegetable, but botanically the cucumber is actually a berry with many seeds, and is closely related to courgettes, pumpkins and melons.

Store cucumbers in a bag in the fridge. This will keep them crisp and fresh and extend
their shelf life. 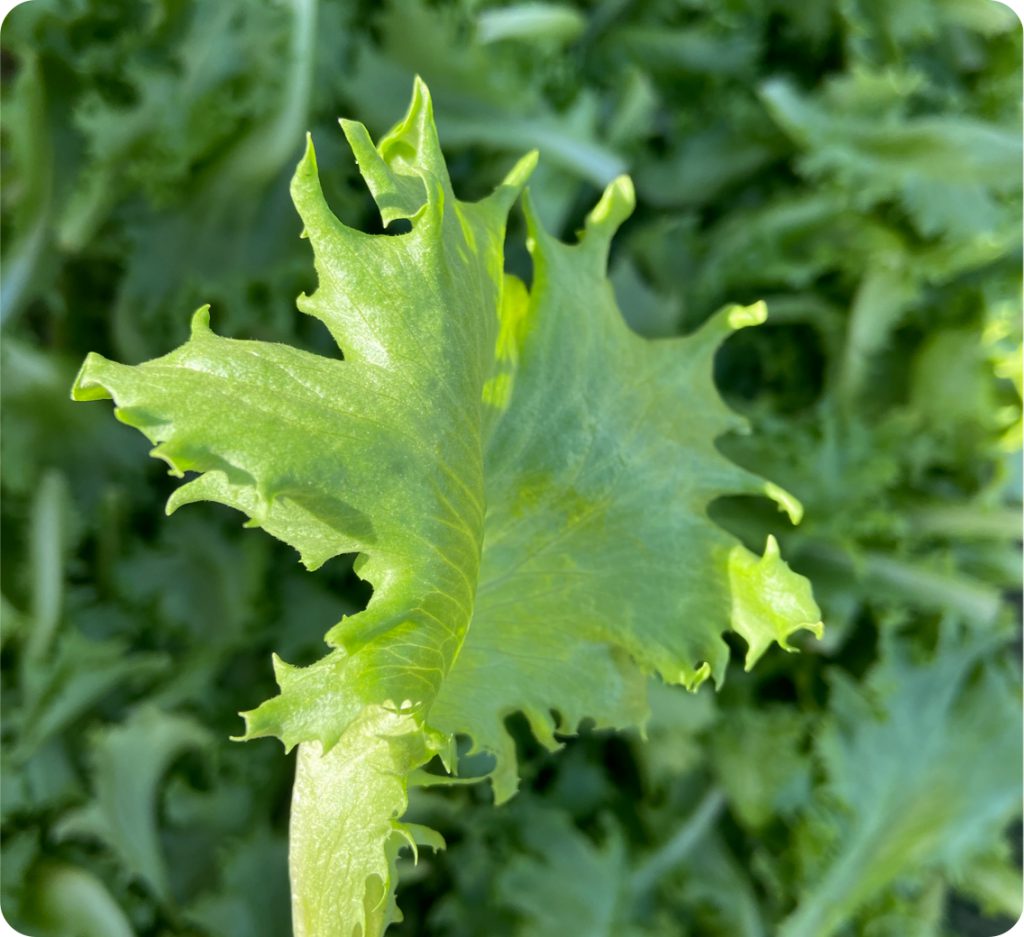 We are in full swing with our new Danish salad project, where we are working passionately to develop tasty salads. Production will be located in our new climate-controlled greenhouses in Bellinge on Funen, where green conversion, recirculation and nature’s own processes are in focus.

The salads are of a very high quality with an extraordinary taste and crispness. These are ready-to-eat products with a longer shelf life than the ones you know today – it is simply Danish salad at its best.

Nordic Greens Salad will be launched in the Spring of 2023.